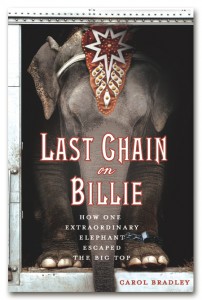 Last Chain on Billie:
How One Extraordinary Elephant Escaped the Big Top

Set against the backdrop of a glittering but brutal circus world, Last Chain on Billie charts the history of elephants in America, the inspiring story of The Elephant Sanctuary in Tennessee and the spellbinding tale of a resilient elephant who defied the system even as she struggled to conquer her past, who never lost sight of the life she was meant to have.

Left in the wild, Billie the elephant would have spent her days surrounded by family, free to wander the jungles of Asia. Instead, traders captured her as a baby and shipped her to America, where she learned to carry humans, stand on a tub and balance on one leg – the full repertoire of elephant tricks. For decades, Billie crisscrossed the country, dazzling audiences as she performed breathtaking stunts. But behind the scenes she lived a life of misery: traveling in trucks, chained for hours on end, barely able to move, giving eight-minute performances under harsh lights and to the sounds of blaring music. And worse.

Finally, she got a lucky break. As part of the largest elephant rescue in American history,  Billie wound up at a sanctuary for performing elephants in Tennessee, able once more to roam through open meadows and share her days with a herd. She would never be beaten again.

But, overcome with anxiety, she withdrew from the rest of the elephants and refused to let anyone remove a chain still clamped around her leg. Her caregivers began to wonder if Billie could ever escape her emotional wounds.

The compelling story of Billie’s battle to reclaim her old self is a testament to the intelligence, emotional complexity and remarkable strength of all elephants, captive or free.

Here’s a video of Billie and her friend Frieda arriving at The Elephant Sanctuary:

Praise for Last Chain on Billie

“After reading this heartfelt, poignant and deeply moving book, you will never look at an elephant the same way again. The narrative is at once brutal, uplifting and gripping. It is almost impossible to grasp the unspeakable cruelty these magnificent, intelligent animals have endured for so many years, all in the name of “family entertainment.” But as Carol Bradley writes with exquisite detail and painstaking research, there is hope yet for these captive animals, and for the human race that has made them suffer so needlessly.” —David Kirby, New York Times bestselling author of Animal Factory and Death at SeaWorld

“Last Chain on Billie is a fact-filled page-turning biography of a magnificent circus elephant’s long, painful, and unpredictable journey from reprehensible confinement to freedom. It is at once riveting, haunting, and inspirational. Billie’s story kept me up at night – tearful and joyful – as she entered and then wouldn’t leave my heart. I also was deeply moved by the selfless work of the wonderful people who ultimately were able to free her once and for all so she could live out her life in safety and peace and with the dignity she so deserves. This outstanding and groundbreaking book will make a difference for other circus elephants and other ‘entertainment animals’ who find themselves living horrific and hopeless lives filled with fear, stress, and uncertainty. It gave me hope.” – Marc Bekoff, author of Why Dogs Hump and Bees Get Depressed, The Emotional Lives of Animals, and Rewilding Our Hearts

“Readers will want to stand up and cheer for Billie as she struggles to remain true to herself in the face of great odds, and they’ll applaud the Elephant Sanctuary for offering this vulnerable but resilient elephant a chance at a new life. This ground-breaking book about the enduring strength of one of our most majestic creatures will capture hearts everywhere.”—Elizabeth Letts, New York Times bestselling author of The Eighty-Dollar Champion.

“Last Chain on Billie brings the reader on an insightful, behind-the-scenes journey to witness Elephant experience in circuses and zoos. Not only do we learn about the realities of captive life, but also about the culture in which we live that has brought such anguish to the gentle Elephant. Billie’s story compels us to reconcile how it is that our species, humans, do things to Elephants, that despite, their might and comparability in mind, they never do to us. This book represents a critical step on the path toward reconciliation with animal kin and human salvation.”—G.A. Bradshaw  Ph.D, Founder and Director, The Kerulos Center, and author of  Elephants on the Edge: What Animals Teach Us About Humanity.

“Heartbreaking though it is, Last Chain on Billie will lift your spirits. You can’t help but root for this feisty, determined elephant who refuses to yield to her human tormentors, and ultimately discovers that people can be kind, too.”—Virginia Morell, author of Animal Wise

“Today, Billie must celebrate every day, for she enjoys a more normal life, thanks to caring humans who spoke up for her and her like. Although the dream of returning to her homeland and her family can never be fulfilled, at least she has other elephant friends and caring humans who treat her kindly. Her story will go a long way towards helping others and saving them from a cruel life of bondage and servitude. Her story will educate people around the world about the nature of her iconic species, sparing many other young elephants miserable captivity.” – Dr. Dame Daphne Sheldrick DBE, David Sheldrick Wildlife Trust, Nairobi, Kenya, and author of Love, Life, and Elephants

“Last Chain on Billie is a wonderful book. It is well-written, well-researched, and well thought out. You cannot read it without realizing how extraordinary elephants are and how extraordinarily bad humans, until only very recently, have treated them. To understand what has happened to change our attitude, I can think of no better book than this. It is a labor of love, and I know many people will respond in kind. Anyone who loves elephants will love this book.” — Jeffrey Moussaieff Masson, PhD, author of Dogs Never Lie About Love and Beasts: What Animals Can Teach Us About the Origins of Good and Evil 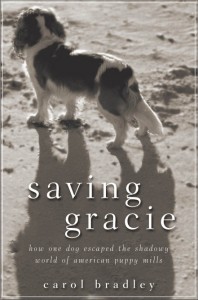 Saving Gracie:
How one dog escaped the shadowy world
of American puppy mills

Saving Gracie is the compelling true story of one dog’s rescue from a Pennsylvania puppy mill and her transformation from a bedraggled animal, worn out from bearing puppies, into a loving, healthy member of her new family. The book also profiles the dedicated souls who stepped forward to save Gracie along the way.

“Journalist Bradley unleashes a scorching investigation of puppy mills, where dogs in filthy cages are forced to breed until they die and are sold riddled with diseases. Her narrative follows Gracie, a sickly Cavalier King Charles spaniel who has never felt grass under her feet but whose lot improves after she’s adopted. Bradley boldly names villains (breeders who failed to register to escape inspections) and heroes (a Wisconsin humane society that saves 1,600 dogs). Not for the fainthearted, the book is an impassioned call to action: Adopt from pet shelters and rescues. (People magazine, March 1, 2010)

“Bradley’s compelling account propels readers on a roller-coaster ride of emotion as they follow Gracie’s journey from a squalid puppy mill to a loving home. But this is also an excellent exposé of a shady industry—it describes legislative attempts to control the large-scale breeding of dogs and evaluates the effectiveness of those efforts.” (Library Journal, February 1, 2010)

“Journalist Bradley exposes the hidden world of puppy mills, where dogs are caged like chickens and forced to repeatedly breed until they die. Unlike most factory farm animals that endure painful confinement and are slaughtered within six months of birth, mill breeding dogs are sentenced to many years of existence in deplorable conditions; many don’t learn to walk because their cages don’t give them enough room to stand. Bradley details the raid of one such mill, Mike-Mar Kennel in Oxford, Pa., which led to the seizure of more than 300 dogs, mostly adults that had languished for years with broken limbs and untreated diseases. Dog 132, a Cavalier King Charles Spaniel later named Gracie, was rescued during the raid. Nearly blind, with decayed teeth and a strong aversion to human contact, Gracie flourished under the love and patience of her adoptive owner, Linda Jackson. Bradley’s powerful narrative will tug at heartstrings, raise public awareness, and, hopefully, help put an end to puppy mills.” (Publishers Weekly, January 4th, 2010)

“Saving Gracie is heart-rending but also wonderfully stirring and empowering. The operators of puppy mills are arrogant, greedy, and cruel, but the people committed to putting them out of business make you want to cheer–and they restore your faith in humanity. Carol Bradley does a great service to dogs by telling this story.”
—Dean Koontz, New York Times best-selling author

“Carol Bradley seizes a national moment in Saving Gracie. With deft investigative skill and a loving heart, she tells the story of Gracie, and her sojourn from a puppy mill.  If we are judged as human beings by the way we treat our animals, this is an eye-opening account, direct and informative, one you will not be able to put down.”
—Adriana Trigiani, New York Times best-selling author of Very Valentine and Big Stone Gap

“Saving Gracie is one of those rare books that will at once disturb, inspire, and move you to action. Read this outstanding book about the enduring strength of the human-animal bond and share it widely. It is that important.”
—Marc Bekoff, author of The Emotional Lives of Animals, Wild Justice, and The Animal Manifesto

“In this book about the best and the worst of human behavior, we see that the best in both humans and canines prevails. Bradley’s cast of angels will fill your heart with joy and gratitude that such souls exist. This book is essential reading for anyone who loves dogs and thinks justice matters.”
—Susan Richards, author of the New York Times best-seller Chosen by A Horse

“Saving Gracie is a story told with verve, with compassion, with style, and with marvelous intelligence.  Any dog lover will be happy to add this to the growing list of wonderful books about dogs.”
—Jeffrey Moussaieff Masson, author of Dogs Never Lie about Love and The Face on Your Plate